Johnnie Cochran was accused by his first wife of domestic abuse multiple times over the course of their relationship, accusations that became very public during the OJ Simpson murder trial - and are seen again in this week's American Crime Story: The People V. OJ Simpson.

Barbara Jean Berry, who married Cochran in 1959 and filed for divorce in 1967 from the lawyer before getting back with him and then again filing in 1977, claimed her husband beat her and said that he and Simpson were 'mirror images of each other in their apparent disdain for women'.

The comparison to Simpson came from the book Life After Johnnie Cochran: Why I Left the Sweetest-Talking, Most Successful Black Lawyer in LA, which Berry released during the trial after she claims Cochran and his father pressured her to deny the abuse claims she made in the past.

Berry, an elementary school teacher, said in her book that Cochran was 'deceitful, manipulative, controlling and abusive'. 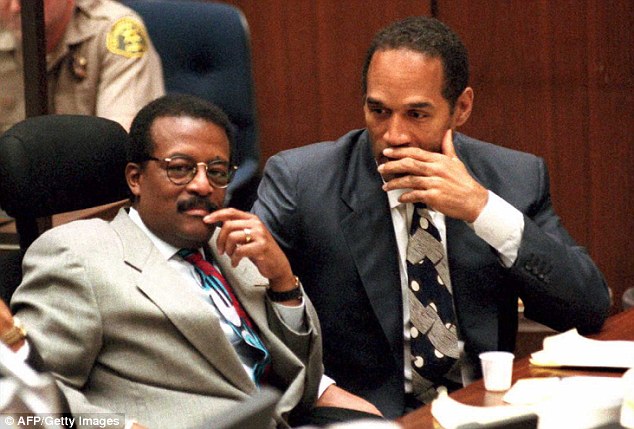 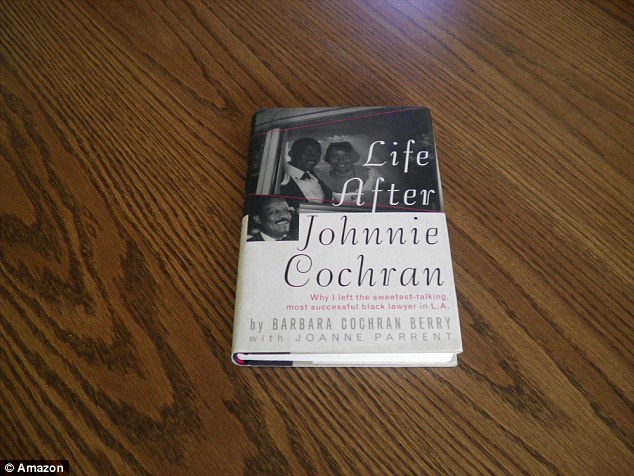 Barbara wrote about Cochran's abuse in Life After Johnnie Cochran: Why I Left the Sweetest-Talking, Most Successful Black Lawyer in LA 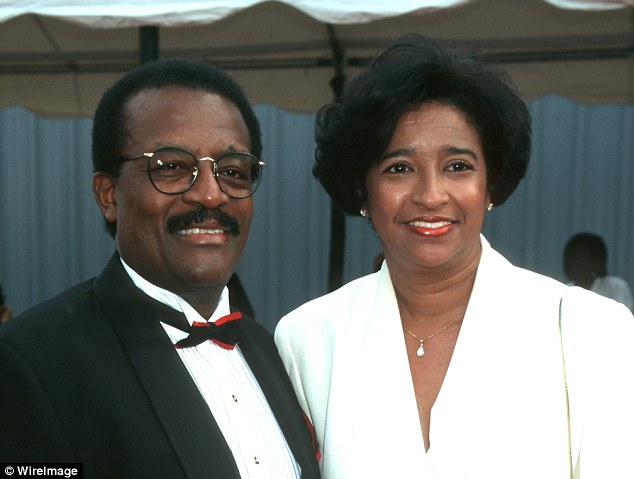 Second wife: Johnnie Cochran and his wife Dale (above) who he married in 1985

In her motion to receive a restraining order against Cochran in 1967, Berry wrote in court papers; 'On April 29, 1967, my husband violently pushed me against the wall, held me there and grabbed me by my chin.

'He has slapped me in the past, torn a dress off me [and] threatened on numerous occasions to beat me up.'

She then filed papers again ten years later that said Cochran had 'without any reasonable cause, provocation or justification physically struck, beat and inflicted severe injury up on the person of the Petitioner'.

The allegations could not have become public at a worse time for Cochran, who was defending a man who had pleaded no contest to beating his now-murdered wife and was on trial for killing her and her friend.

The Los Angeles Times attempted to dig deeper at the time, something that was depicted on Tuesday's episode of American Crime Story: The People V. OJ Simpson.

'I have never touched her or hit her, and we are very good friends to this day,' Cochran said at the time.

'Those are 20-year-old statements for legal reasons. She knows they are not true and will be happy to talk to you about it.'

When the paper contacted Berry however, she had little to say about the subject, ultimately saying; 'I will not discuss it. I never said I wanted to be interviewed.'

Berry released her book shortly after in August 1995, which not only detailed the incidents of abuse but also Cochran's philandering with his first wife, saying the lawyer was  'essentially a bigamist, portioning himself out to two families'.

That other family was Cochran's mistress Patricia, who was the mother of his son Jonathan. Berry and Cochran had two daughters, Tiffany and Melodie.

Tiffany spoke with the New York Observer in 2006 and was asked what she thought about her mother's claims, saying; 'It’s hard for me to imagine it’s true, but I can’t imagine her lying, either. It’s one of those strange things.'

She then added; 'This trial brought out the worst in everybody.'

That was likely a reference to Patricia, who went public with her 28-year affair with Cochran during the trial and the fact that the two had a son.

Both Berry and Cochran's second wife Dale, who he married in 1981 after the two met in 1985, were aware of the lawyer's relationship with Patricia. 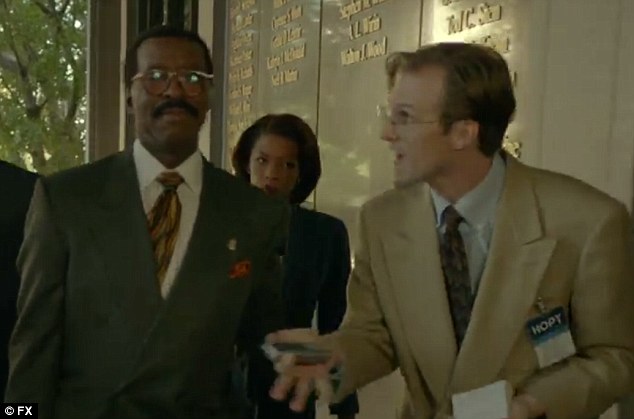 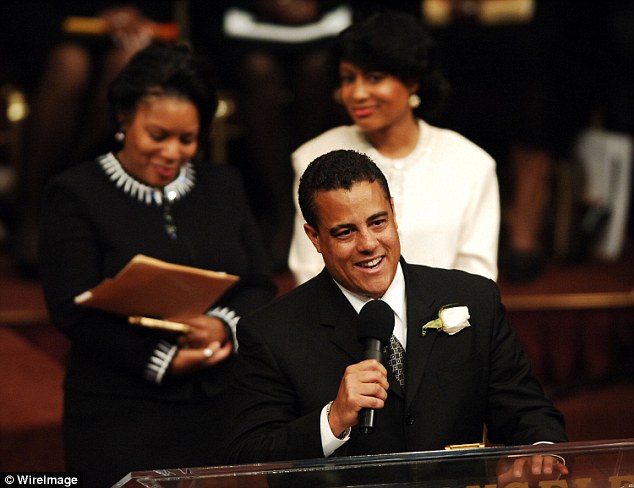 Family: Tiffany Cochran Edwards, Melodie Cochran and their brother Jonathan Cochran speak during the funeral service for their father Johnnie in 2005 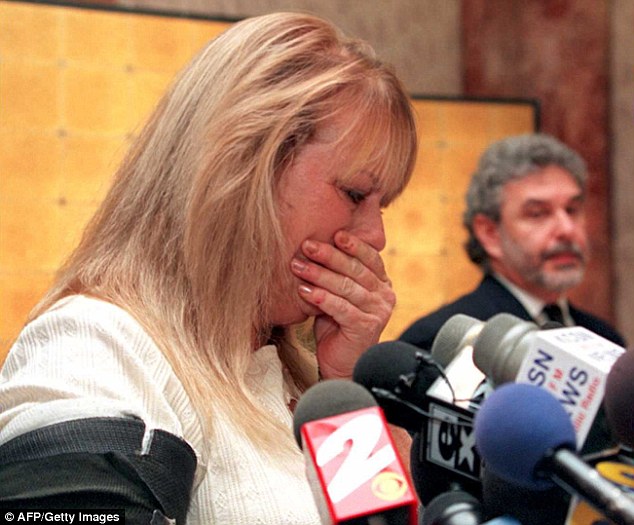 Other woman: Patricia Cochran (above) holds a press conference announcing she is suing him during the OJ trial in 1995

Tiffany told People that her father had given Patricia $4,000 a month and that she was treated like family but still decided to go public and demand more money from Cochran.

'She made it seem like she was a secret ... that was not the case,' said Tiffany of Patricia's appearance on Geraldo during the trial when she revealed her relationship with Cochran.

'We all embraced Patty.'

In that same interview Berry said that she supported Patricia in filing her palimony suit against Cochran, in which she asked for $1million.

She also said; 'I'm just glad I'm not part of that circus any more.'

Berry also addressed her refusal to comment to the Los Angeles Times in her book, saying that after they discovered her claims, Cochran called her saying: 'You will want for nothing ever, if you'll just deny the allegations. Tell the reporter I was a wonderful guy.'

She said that if she had done that she would have made far more money than she was making with her book.

Berry said it was more important to go forward and tell her story after years of torment, saying Cochran had told her for years: 'You're just a poor orphan schoolteacher. You wouldn't have anything if it weren't for me.'

She said the book was done not just for her but for all abused women.

There was also a report of another mistress named Elaine by the New York Daily News in March 1995.

That woman was discovered after Cochran allegedly deposited a check meant for her into his daughter's bank account.

Cochran died in 2005, and is still considered to be one of the greatest trial lawyers of all time.

The Africa We Do Not See On TV

What is the most commonly accepted currency in Africa?

Who is Nelson Rolihlahla Mandela?

Do you know the most visited country in Africa?

The largest African country is which one?