By Barney Calman for The Mail on Sunday

It has been hailed as a ‘dream machine’ and a ‘no-needle, no-scalpel, no-scar’ alternative to slimming surgery.

But now it seems a popular flab-busting treatment that uses extremely low temperatures to kill fat cells – without damaging the skin above – may come with a rather bizarre and unwanted consequence.

The procedure has resulted in some patients getting fatter, according to a new report that was unveiled at the British Association of Aesthetic Plastic Surgeons (BAAPS) annual meeting this month. 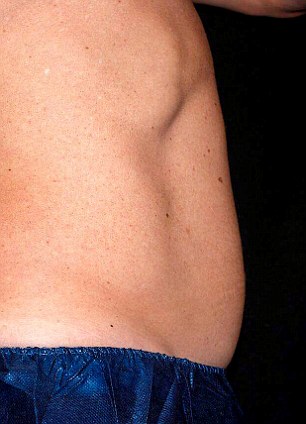 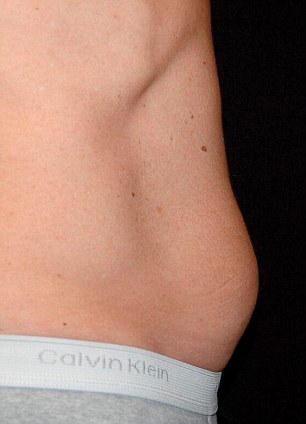 Pictured: A patient's stomach before and after the treatment, which doctors say can actually lead to weight gain

Cryolipolysis is billed as a non-invasive alternative to liposuction, a type of surgery that involves inserting fine hollow needles beneath the skin to break up and then suck out fat.

However the fat-freezing treatment, endorsed by celebrities such as singer Christina Aguilera and a host of British television personalities, has now been linked to 473 incidents of a condition called paradoxical adipose hyperplasia (PAH).

Instead of a slimming effect, a large mass of new fat grows in the area treated. The majority of cases have been male, added the researchers.

An early paper on the condition was published in 2014, and described a 41-year-old male patient who underwent a single cycle of cryolipolysis to the lower abdomen.

The treatment itself was ‘without incident’ and the patient reported an initial decrease in fat volume.

However, three months after the sessions he noticed a ‘non-tender growth of tissue at the site and in the shape of the treatment area’.

The latest data, compiled by the Miami Plastic Surgery (MPS) Medispa, continues: ‘On physical examination, there was a rectangular, sharply marginated subcutaneous [under-the-skin] soft tissue mass in the… area of the cryolipolysis treatment application.

‘The tissue was… noticeably firmer than surrounding tissue, but not hard.’

Other patients have reported the growth occurring up to six months after treatment.

It had been previously thought that there was an incidence of one PAH case for every 4,000 treatment cycles. However, the new study suggest it could be occurring more regularly.

In a three-year period during which 693 patients underwent cryolipolysis at MPS Medispa PAH events were reported in six patients – almost one in 100.

Patients were aged between 20 and 53, and eight in ten were male, with the majority of sufferers Hispanic. None had a pre-existing condition that might have triggered the problem, and none was on medication.

A genetic link has been suggested after it was also observed that ‘four patients who were first-degree relatives had cryolipolysis at a different practice but showed similar clinical presentations’.

Plastic surgeon Dr Michael Kelly, who led the study, said: ‘Although it is rare, the patients who this has happened to are obviously very concerned. It seems that the procedure, for reasons we can only speculate on, causes new fat cells to grow in the lower stomach area when treated – as opposed to making it disappear, as it is supposed to.

Most patients have chosen to have liposuction surgery and have been very happy with the result. When examined, the fat removed appears normal.’

The large, rectangular vacuum applicator ‘could have something to do with causing the problem’, added Dr Kelly. ‘We no longer treat patients with this, using different ones with a broader base that do not suck in the fatty area being treated quite as far. Since doing this, we have seen no new cases.’ 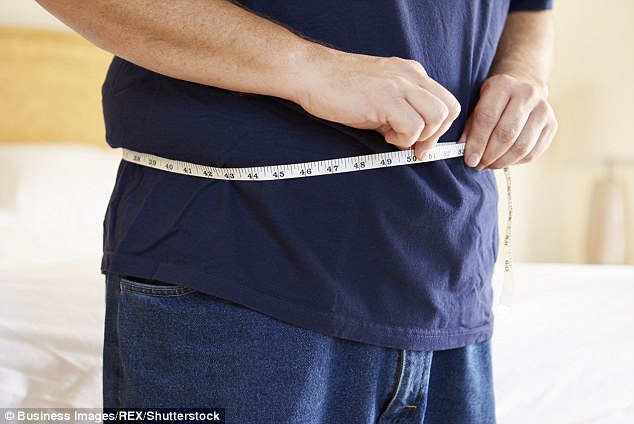 Cryolipolysis is billed as a non-invasive alternative to liposuction, but in some cases it has been recorded that a large mass of new fat grows in the area treated (file photo)

Approved by US watchdogs the Food and Drug Administration in 2010, cryolipolysis was first offered in UK clinics shortly afterwards. Popular brands include market leaders CoolSculpting.

During the procedure, as the machine is switched on, a strong vacuum effect pulls excess flab into an applicator.

The machine then cools the suctioned-up fatty area to between -6C and -10C.

The low temperature does not damage the skin but causes cells to freeze, then thaw. The process makes them break down. Over subsequent months, the body naturally removes those dead cells.

Plastic surgeon Nigel Mercer, former BAAPS president and current president of the British Association of Plastic and Reconstructive Surgeons, said: ‘Today, it is a legal requirement that all patients are warned of all the complications of the treatment they are contemplating.

‘Our patients are educated and have access to information as never before and so they must be informed of all complications, even if they are rare.’

Previously concerns were raised over patients being left with cold burns on the skin due to incorrect use of the machine.

No tags for this article

Julie Chrisley, wife of flamboyant millionaire Todd Chrisley, likes to cook. With her celebrity status and platform (Chrisley Knows Best), she figured she could launch

What are the most spoken languages in Africa?

10 Interesting Facts About Africa That Will Amaze You: Check Number 1

Busiest International Airports on the continent are located where?

10 Most Richest Persons In Africa